The future is multi-nodal

TriTAG's map of the LRT (red) and planned express bus routes. The line is more interurban than it is CBD-to-suburb.

My last Record column this year evaluates the idea of the central business district in the context of Waterloo Region, and (of course) again discusses light rail. Hopefully it isn’t too unfocused:

The Future is Multi-Nodal

Commentary on the light rail transit project reveals a common but outdated assumption that a city should have a central business district (CBD) — an area of downtown that no one lives in, but many commute to from the suburbs. A frequent argument against the project is that downtown Kitchener isn’t a large enough CBD and that there aren’t enough people commuting in. But the whole concept of a central business district is a thing of the past, and light rail does not need a large CBD to make sense. The future lies in urban areas composed of multiple dense nodes connected by high-quality transportation — which happens to be exactly what Waterloo Region is planning for.

Cities once contained housing in addition to commerce and industry. When streetcar lines were started, they moved people within the city, but they also opened up the suburbs for residential development that promised tranquility and fresh air. Later, the availability of cars and cheap fuel together with massive post-war highway and road development led to suburban flight on a larger scale. Commerce also followed the highways and set up shop in suburban malls. Only jobs remained, producing the classic CBD — where commuters stay from 9 to 5, leaving an empty city every evening. But those long commutes aren’t healthy for our cities, and an office monoculture is not conducive to urban living.

Most of Waterloo Region’s growth has occurred after the post-war years, and many jobs are located in suburban office parks. So we have no reason to cling to the notion of a CBD — it just doesn’t apply. But that’s not a bad thing. Instead of jobs clustering in any single downtown, many destinations and much employment have fortunately clustered along a reasonably dense linear corridor.

END_OF_DOCUMENT_TOKEN_TO_BE_REPLACED

The streetcars that crisscrossed North American cities and towns in the late 19th and early 20th centuries were generally built and run by private companies, and operated at a profit. With the rise of the private automobile and due to other factors, they were no longer able to turn a profit, even in the cities in which streetcars were not deliberately run into the ground. I don’t think cities realized at that time that the infrastructure of the streetcar lines may have actually been worth paying for — and not just something to be allowed if paid the usage fees by streetcar companies. And so the infrastructure was swept away with the streetcars, which paved the way (no pun intended) for the downturn of urban areas and boosted suburb development.

Fast forward to now. Many people still participate in discussion of, and decisions about transit in North America without understanding that transit is not just about moving people effectively. From such a point of view, it can make sense to advocate for high-frequency buses and not much else in many cases. (Of course, there are also factors such as comfort and simplicity to consider.)

The other side of transit is infrastructure. Transit infrastructure, generally rail-based, changes the fabric of its surroundings. It transforms the geography, and attracts disproportionate development to its stations or corridors. Once built, it is taken as a permanent and reliable connection and short-cut between disparate places. It is visibly in place, a financial and social investment that is both useful and that cannot be easily picked up and moved. In other words, it is infrastructure. And such infrastructure is central to reclaiming an urban landscape.

Waterloo Region LRT as a tipping point for transit

The case for LRT in the region is solid, but it is of course unusual for North America to date in how proactive it is. the transport politic wrote about the plan, saying we would be the “smallest in North America to build a modern electric light rail system.” Hamilton — the city with a bus system called the “Hamilton Street Railway” — is now working on a plan for rapid transit as well, with a strong citizens’ push for light rail. GO Transit is slated to bring commuter buses to Kitchener in a few months, and trains to Guelph and Kitchener by 2011. The City of Cambridge and the Region of Waterloo are pushing for extending GO trains to Cambridge via Milton.

Most interestingly, in light of the LRT plans here and under the same provincial pressure to grow up and not out, the even smaller city of Guelph is now going to consider light rail in a review of its transit system.

I think as it progresses into the procurement and construction stages, the Region of Waterloo light rail plan will serve to tip transit in Southwestern Ontario to something more serious and more usable. Currently, public transit infrastructure is assumed to be something for large cities (at least in North America), and our plans will show otherwise.

First will be Cambridge, which will be increasingly clamoring for its light rail extension. Other cities and areas — Hamilton, Guelph, London, Brantford — will consider light rail and bus rapid transit (BRT), and people there will know that LRT is a serious option, and that BRT is a pale imitation. Cambridge and Guelph will get some kind of rail link along an existing right-of-way. GO Transit will perhaps provide the missing link between Kitchener/Cambridge and Hamilton. And once the LRT is in place in Waterloo Region (if not before then), we will certainly start exploring additional transit infrastructure, such as to St. Jacobs and Elmira and along cross-corridors.

People in Southwestern Ontario will realize that true, useful, and pleasant transit is possible, and will stop being satisfied with token bus service and congested roads. And the Region of Waterloo will lead the way.

Speech against the Ira Needles development

On Monday, June 22, Waterloo City Council considered the proposed development and zoning changes for the huge Ira Needles mixed-use development at Ira Needles Boulevard and University Avenue, which would straddle the border between Waterloo and Kitchener.

The public input sessions regarding this proposal were only conducted in the immediate surrounding suburban area, so there was poor awareness of this project. Several of the presentations at the meeting were by the developers and associated people. One lady argued against the proposal because of its proximity to the landfill — her concern is that the development will be unusable and unsafe as a result, and that this will have unfortunate consequences for the landfill’s operation. Another argued that it will contribute to serious water contamination issues. My speech, reproduced below, was the only one against the very idea of the development. A number of people later came up to shake my hand for giving the speech.

Unfortunately, City Council disregarded their own misgivings as well as the concerns raised, and voted unanimously in favour of the development. In writeups about the ruling, the Record and the Waterloo Chronicle mentioned my comments with varying degrees of accuracy.

END_OF_DOCUMENT_TOKEN_TO_BE_REPLACED

Last night I spoke at Waterloo Regional Council in support of the staff recommendation for a light rail system for the region. The speech incorporates and expands on my earlier draft and on my idea for a more complete transit system for the region. I had several people come up to me to express their support, so I want to share the speech: END_OF_DOCUMENT_TOKEN_TO_BE_REPLACED

The Waterloo Spur alternatives should not be treated as opposing alternatives but as an operations issue which should be seeking to serve both corridors over the long-term. As currently structured, the alternatives create a fundamental choice between a more “hidden” LRT system and one that is open and public along the King Street alignment. There was concern that the physical environment and walking distances in the R&T Park were not currently supportive of transit use, whereas the King Street alignment had the potential to contribute to the ongoing intensification along the corridor and capture ridership from Sir Wilfrid Laurier University. It was noted that if the initial investment were to occur along King Street, a potential branch along the Waterloo Spur could be created at anytime in the future and that this could be tied to development within the R&T Park.

That’s commentary from the expert panel cited in the Region’s recent report on the preferred Rapid Transit plan.

I agree with that assessment, and think that if only one of the routes has to be built at the outset, it should be the King Street route, which connects Laurier, supports development at King & University, and provides for redevelopment potential along the suburban-looking King & Weber area. This is as opposed to the R&T Park, which is huge and spread out, much of it still far from any future light rail station.

However, I do not believe this is the best way to provide for transit and development in Waterloo. I think both routes should be constructed at the beginning, and furthermore that there should not be a weird and confusing detour from King that there is right now in the plans. Let’s assume that my previous suggestion of keeping both tracks on Caroline in Uptown Waterloo is followed. North of that, half of the trains would return to King, and go all the way up to Conestoga, and the other half would follow the spur line all the way to the St. Jacobs Market, returning via King. This would form a useful loop. See the map at the bottom of this post.

What this doesn’t account for is a connection between the universities. In the current plans there is probably a bus route that runs along there. However, University Avenue, especially in between the two campuses, is an excellent place to create a vibrant street, with nice-looking residences and all kinds of shops and restaurants. The best way to serve the students here is to have a streetcar running along University, as is illustrated in the map. Such a streetcar would also serve the outlying areas in the same way as a feeder bus would — perhaps going to both ends of University Avenue to serve the suburb commuters and connect them to the LRT spine and the universities. It would lead to development elsewhere along University Avenue. Also, RIM Park could in this way become a trolley park. (Back when streetcars were commonplace, streetcar operators might open an amusement park at a terminus in a streetcar suburb to attract riders on weekends.)

I believe my proposal is a much more complete solution to transit in Waterloo than just one branch of LRT. Streetcars make a lot of sense for cross-corridors that are ripe for development of vibrant streets. In Waterloo, University Avenue is such a place. I haven’t studied the rest of the region, but I’m sure that several of the current cross-corridor bus plans could be fruitfully replaced with streetcars. It is probably unnecessary to explain why streetcars are a better driver of development and ridership, so I won’t do it here.

What this means for the current plan is that Council should be encouraged to have it both ways, and to construct both routes. Cross-corridor streetcars can be separate projects, and they can in fact be started immediately. A University Avenue streetcar would make itself useful very quickly. 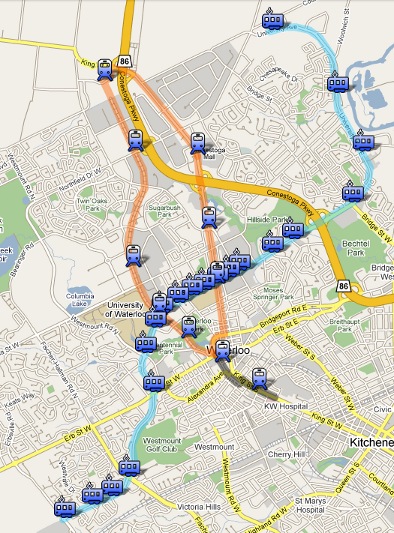 Click this map to see the full one in Google Maps