How the University of Waterloo fails its pedestrians

Missing sidewalks are in blue, access roads that are used as paths are in red, and orange indicates unpaved or inadequately distinguished paths. (The image links to the detailed view on Google Maps.)

The University of Waterloo’s main campus was built in the 1960s, and it shows badly. The campus is designed with a strong car focus, despite UW being a university with extensive pedestrian traffic. I’ll leave further discussion of the problems of UW’s suburban form to a future post, and restrict this one to existing pedestrian issues.

How does the University of Waterloo fail its pedestrians? It often provides sidewalks on only one side of a road or sidewalks that are too small. Many main paths are not paved and encounter obstacles such as parking lots, man-made berms, poor or absent crosswalks, and, of course, weather conditions. UW forces pedestrians onto access roads designed for cars that make those on foot feel distinctly unwelcome. Instead of using more appropriately-sized vehicles, it uses regular vans and SUVs (maintenance, police, delivery, access vehicles) right on major pedestrian thoroughfares. Many buildings connect poorly to their surroundings, with few access points and several buildings actually surrounded by something resembling moats. The university is difficult to get in and out of, with poor connections to an existing path network and missing sidewalks on major roads (Westmount Road and Seagram Drive), as well as on the within-campus Ring Road itself. The adjacent shops on University Avenue surround busy parking lots and are frankly hostile to pedestrians, despite the vast majority of customers being pedestrians.

There are additional issues for cycling and handicapped access, such as excessive use of stairs, man-made topographic obstacles, mismatched or absent curb cuts, and so on.

In the map above, I’ve tried to point out most of the problematic sections around UW, excepting the significant additional troubles of ongoing construction. Below are a few photos I took this week that give a feel for the kinds of problems pedestrians face on the University of Waterloo’s main campus. UW does have many portions that work fine for walking, but that is no excuse for its failures.

Westmount Rd at University Ave. There are no sidewalks despite this being a direct path to the church colleges.

University Avenue by Westmount. There is a muddy path towards Ring Road and a too-narrow sidewalk adjacent to the road. Buses are frequently found in that bike lane.

Detouring a puddle on a University Avenue sidewalk. 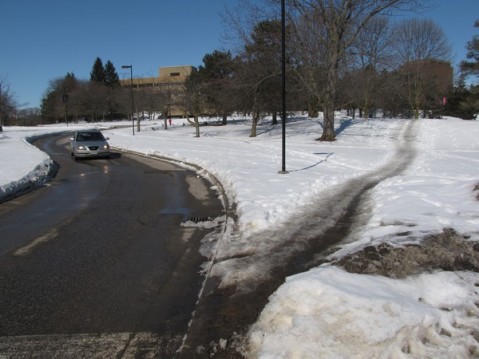 This well-used path between University Avenue and Ring Road crosses a steep hill and is often muddy and icy. Alternatives either require a long detour or using this car-only exit road (not recommended).

Ahead is the muddy way to one side of the largest student parking lot. Instead of resolving this problem, UW exacerbates it with its fence along the side of the lot. Sometimes the snowbank at the end of the fence is many metres high, and it has probably led to many falls.

The other direction — the path from the parking lot to Hagey Hall. You cross both directions of University Avenue, that berm, a parking lot, Ring Road, and then go to your destination.

This is the grand entrance to UW’s main campus, used by many transit riders and pedestrians. I don’t know the function of the barrier in the foreground, but making pedestrians feel welcome isn’t it. Seagram Drive past the intersection has no sidewalks. 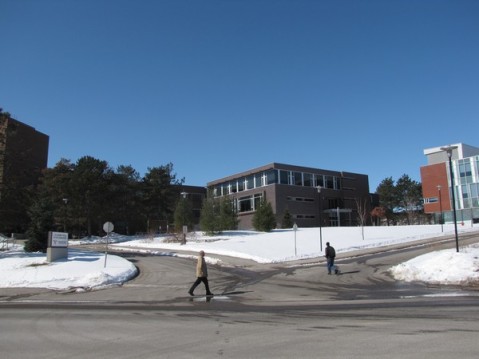 Ring Road by the Tatham Centre as viewed from the side without sidewalks. Here two access roads and the absence of a crosswalk make a downright pedestrian-hostile space (on the side with sidewalks).

This is a main path to Hagey Hall and beyond, but cars rule here.

This is a commonly used connection between paths by Hagey Hall and University Avenue (via the PAS access road). It’s steeper than it looks.

Well, this is just grate. The interrupted pavement is on a path to the PAS building.

Many stairs to choose from at the arts quad in front of the library, but usually the shoveled parts don’t go where you need to.

This is a main path to the engineering lecture hall (RCH), but it is clear to pedestrians that it’s not their turf.

This sorry excuse for a sidewalk is next to the Davis Centre. (I mean the one on the right side.)

Straight ahead is a path to one of the main UW bus stops at the Davis Centre. Mud and ice galore.

(These photos are by no means a comprehensive account.)

4 responses to “How the University of Waterloo fails its pedestrians”